U2 Part 2 by Benjamin

At 5:30, the security let us onto the field. The stage, AKA "The Claw" was huge and covered half of the stadium floor. They had carpeted the grass with metal so you could walk on it. Dad and I walked as quickly as we could without running, and were able to get a place at the rail on Adam's side. There we met an older man and his daughter, who was crazy about Muse, U2's opening act. We waited until 7:00 until Muse started playing. We really enjoyed their act, but were kind of disappointed that they didn't play Knights of Cydonia, one of our favorite pieces.


After they were finished, we had to wait another half hour for U2 to set up. In that time, the people next to us were given a bass string and the set list for Muse. We also bought frozen lemonade.


Then, finally, U2 started their concert with "Breathe." Everybody screamed as The Edge, Larry, and Adam walked on to the stage. Then, they screamed louder as Bono came on. I was so excited because I looked up and Bono was right there. Also I was able to see my favorite band LIVE after watching all of Dad's music videos. They also played some of my favorite pieces, like Vertigo, Elevation, and City of Blinding Lights. During City of Blinding Lights, one boy my age was taken out of the crowd to walk/run with Bono. I was so jealous. Afterwards, Dad and I were talking, and Dad was like "That could have been you!"


It was a great experience. 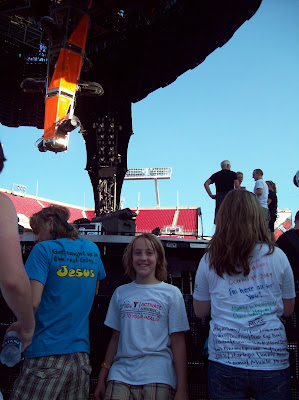 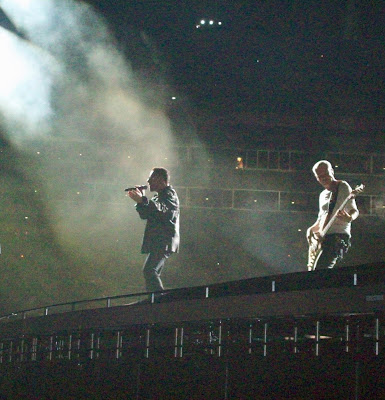 Larry during City of Blinding Lights. The screen (top) split apart and descended upon the stage. It was an awesome effect. 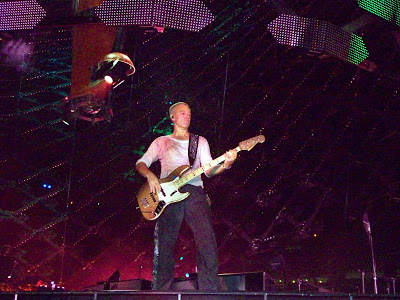 During the concert, I was estatic! 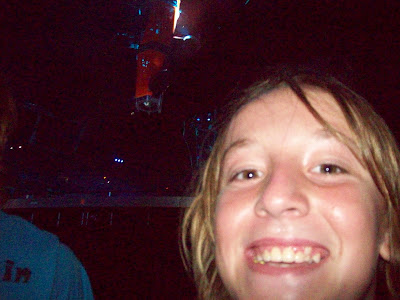 The noisy, stuffy hallway where we stood for 2 1/2 hours! If anybody asks me what hell is like, that's it. 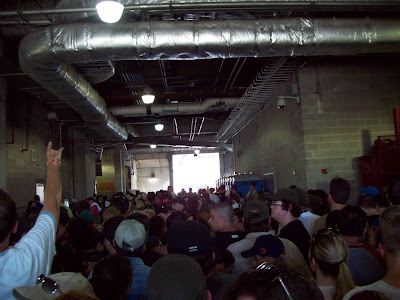