The cousins are here!! 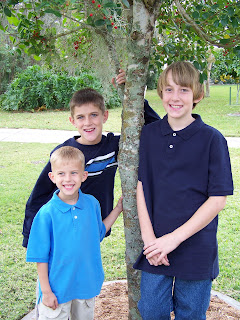 Time for a photo shoot...we thought the backyard would be easier than Penney's. 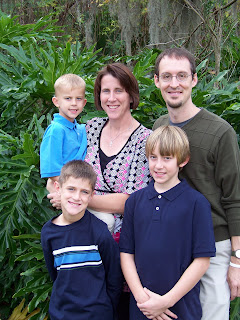 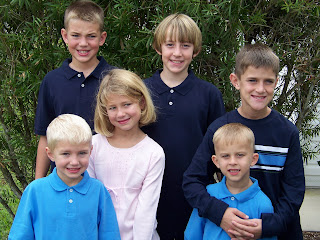 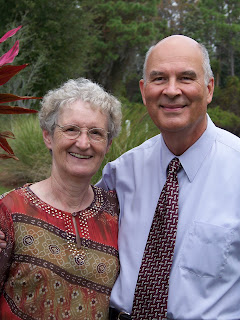 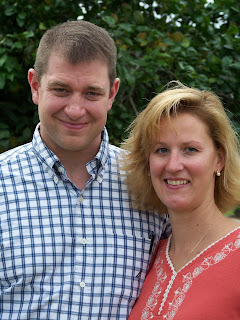 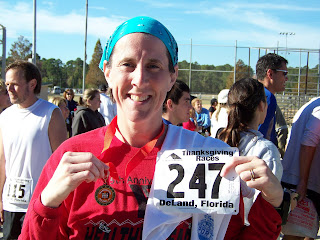 Pictures from the 10 miler race on Thanksgiving. The boys ran, too, but didn't have the camera. I was still out on the course, running for 1 hour and 39 minutes!! 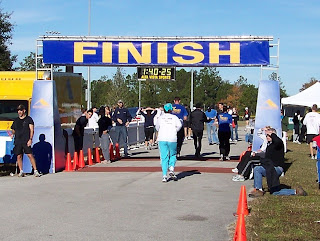 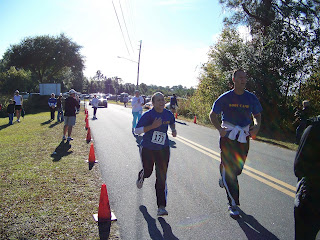 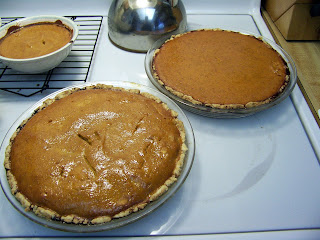 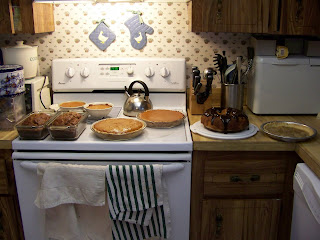 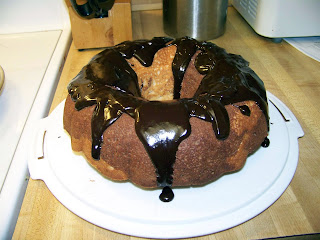 This year, I was assigned desserts for Thanksgiving. I was searching for ways to make them (a little) healthier. I consulted my Healthy Cooking magazine and found some recipes to try. Here are the finished products.
Posted by Karen and Chris at 11/28/2008 08:41:00 PM 1 comment:

Chris forwarded this link to me. Click here and take a civics literacy test. It took me about 10 minutes, because it has over 30 questions. Read carefully!! I got 88%, and Chris scored 98%. Well, he had better, since he's a social studies teacher! Quite impressive. 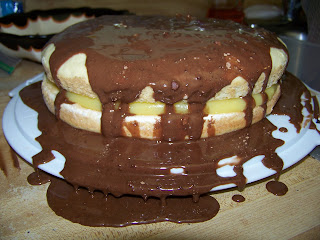 Somehow I don't think this is what they meant when they said to let some of the icing drizzle down the sides...maybe I should have used a little less milk and a little more confectioner's sugar!!!
Posted by Karen and Chris at 11/22/2008 01:44:00 PM 1 comment: 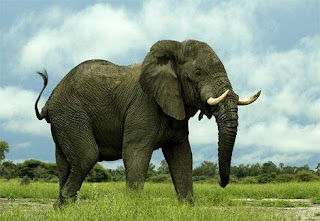 I got this joke forwarded to me by my mother. As I teacher, I especially enjoyed it.

My five-year old students are learning to read. Yesterday one of them pointed at a picture in a zoo book and said, 'Look at this! It's a frickin' elephant!'

A president who can speak???

Obama's Use of Complete Sentences Stirs Controversy
by Andy Borowitz


In the first two weeks since the election, President-elect Barack Obama has broken with a tradition established over the past eight years through his controversial use of complete sentences, political observers say.

Millions of Americans who watched Mr. Obama's appearance on CBS's 60Minutes on Sunday witnessed the president-elect's unorthodox verbal ticks, which had Mr. Obama employing grammatically correct sentences virtually every time he opened his mouth. But Mr. Obama's decision to use complete sentences in his public pronouncements carries with it certain risks, since after the last eight years many Americans may find his odd speaking style jarring.

According to presidential historian Davis Logsdon of the University ofMinnesota, some Americans might find it "alienating" to have apresident who speaks English as if it were his first language. "Every time Obama opens his mouth, his subjects and verbs are in agreement," says Mr. Logsdon. "If he keeps it up, he is running therisk of sounding like an elitist." The historian said that if Mr. Obama insists on using complete sentences in his speeches, the public may find itself saying, "Okay,subject, predicate, subject predicate -- we get it, stop showing off."

The president-elect's stubborn insistence on using complete sentences has already attracted a rebuke from one of his harshest critics, Gov.Sarah Palin of Alaska. "Talking with complete sentences there and also too talking in a way that ordinary Americans like Joe the Plumber and Tito the Builder can't really do there, I think needing to do that isn't tapping into what Americans are needing also," she said.
Posted by Karen and Chris at 11/22/2008 08:22:00 AM No comments:

We need a cold snap! 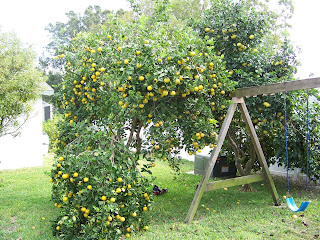 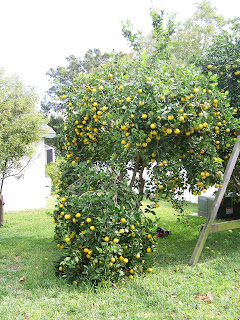 Our orange and grapefruit trees are heavy (literally) with fruit! The tree on the left is full of juicer oranges, while the one on the right contains pink grapefruit. We are eager to get them off the tree, but they don't sweeten up until we've had our first cold spell. A cold front is coming through today, but overnight temps will probably only be in the 50's. Once we see
temps in the upper 30's, we can start to pick them. Hopefully they will be ready by December, so we can bring a bunch with us to Pennsylvania!
Posted by Karen and Chris at 11/15/2008 01:37:00 PM No comments: 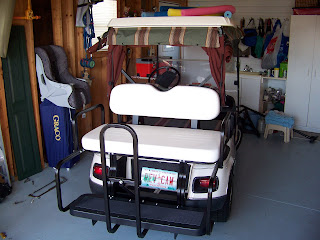 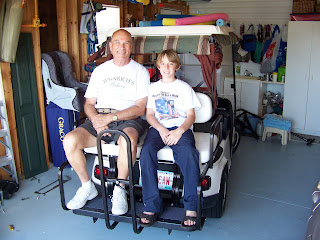 Last weekend, Chris, Benjamin, and our friend (and golf cart mechanic) Terry went over to Mom and Dad W.'s house to work on their early Christmas present. Their house came with a golf cart, which was equipped to hold golf bags, not passengers. The cart only holds 2 adults or 1 adult and 2 children at a time. That becomes an issue when all six grandchildren are visiting. So for Christmas, Cindi's family and ours chipped in to convert the golf cart to a passenger cart. It now has two seats, which will hopefully hold all the grandchildren at once!
Posted by Karen and Chris at 11/15/2008 01:34:00 PM No comments:

A letter that was forwarded to me, written by Roger Ebert.

As the mighty tide swept the land on Tuesday night, I was transfixed. As the pundits pondered red states and blue states, projections and exit polls, I was swept with emotion. Not because America was "electing its first Black president." That comes a little late in the day. It was because America was electing the right President.


Our long national nightmare is ending. America will not soon again start a war based on lies and propaganda. We will not torture. We will restore the rights of freedom of speech, freedom of privacy, and habeas corpus. We will enter at last in the struggle against environmental disaster. Our ideas will once again be more powerful than our weapons. During the last eight years, the beacon on the hill flickered out. Now the torch will shine again.


We will bring our troops home, in the right way. Am I against the war? Of course. Do I support our troops? Of course. They were sent to endanger their lives by zealots with occult objectives. More than 4,000 of them have died. Even more lives have been lost by our coalition forces than by our own.


Do I blame George Bush? At the end of the day, I don't know that I really do. I agree with Oliver Stone that Bush never knew he had been misled until it was too late. I blame those who used him as their puppet. The unsmiling men standing in the shadows. On Tuesday the righteous people of America stood up and hammered them down.


Lots of people stayed up late Tuesday night. They listened McCain's gracious, eloquent concession speech. He was a good man at heart, caught up in a perfect storm of history. He had the wrong policies and the wrong campaign. At the end, let me tell you about a hunch I have. In the privacy of the voting booth, I think there is a possibility that Condoleezza Rice voted for Obama.


I stayed up late. As I watched, I remembered. In 1968 I was in the streets as a reporter, when the Battle of Grant Park ended eight years of Democratic presidents and opened an era when the Republicans would control the White House for 28 of the next 40 years. "The whole world is watching!" the demonstrators cried, as the image of Chicago was tarnished around the world. On Tuesday night, the world again had its eyes on Grant Park. I saw tens and tens of thousands of citizens with their hearts full, smiling through their tears. As at all of Obama's rallies, our races stood proudly side by side, as it should be. We are finally, finally, beginning to close that terrible chapter of American history.


President Obama is not an obsessed or fearful man. He has no grandiose ideological schemes to lure us into disaster. He won because of a factor the pundits never mentioned. He was the grown-up. He has a rational mind, a steady hand, and a first-rate intelligence. But, oh, it will be hard for him. He inherits a wrong war, a disillusioned nation, and a crumbling economy. He may have to be a Depression president.


What gives me hope is that a great idealistic movement rose up to support him. Some say a million and a half volunteers. Millions more donated to his campaign. He won votes that crossed the lines of gender, age, race, ethnicity, geography and political party. He was the right man at a dangerous time. If ever a president was elected by we the people, he is that president.


America was a different place when I grew up under Truman, Eisenhower and, yes, even Nixon. On Tuesday that America remembered itself, and stood up to be counted.

Just in case you missed it....

Monday morning, after we saw Joe Biden, Jonathan brought the flag he received to school. Here's what his teacher related to me:

Mrs. Hopkins: Great! How exciting, but tell me, who is Joe Biden?

I'll be dragging tomorrow, because I am staying up for his acceptance speech. The CNN commentators have been very eloquent...which is good, because I am absolutely speechless. President Obama. Amazing.
Posted by Karen and Chris at 11/04/2008 11:14:00 PM No comments:

9:00 PM. One boy asleep (Jonathan). Two other boys up past their bedtimes. Everytime CNN flashes a "breaking news," they cheer if it is for Obama and boo if it is for McCain. Quite a fun night. I'm feeling a little more confident now, but am still incredibly nervous. I won't sleep well until the results are all in.

At 10:00PM, we'll switch over to Comedy Central. John Stewart is doing a live election night show. I can't wait to see how they are going to mock CNN's latest technology, especially the "hologram" figure they showed at the beginning of the broadcast.
Posted by Karen and Chris at 11/04/2008 09:01:00 PM No comments:

Well, maybe not brainwashing, but...

We took the three boys to see Joe Biden tonight. He and his wife came to Embry-Riddle University here in Daytona. We got there around 5:30, with him set to appear at 7:15. There was a bit of grumbling coming from Benjamin. He figured seeing Obama last month covers it. But he cheered up once we got there and he got a sign and an American flag.

Joe Biden exceeded my expectations. I figured he would spend the whole time attacking McCain and Palin, but he didn't. To be sure, there were a few barbs. But he spent much of the time on a serious note, talking about the problems in our society and our economy, and what their ticket would do to help. It was vdery uplifting.

Alexander lost his voice a bit from yelling, and Jonathan spent much of the time with his hands over his ears. All in all, a fun family evening.
Posted by Karen and Chris at 11/02/2008 08:53:00 PM 1 comment: