It's been almost a month now living in our apartment, and I have to say it's been an easier adjustment than I expected. Although it's small, the apartment is in great shape, it's clean, and it has a lot of storage space for its size. Right outside our door is the playground, which I thought the boys would use all the time. Instead, they've teamed up with some of the neighborhood children and spend their afternoons scootering around the complex.

It's a huge place - we're in building 29 out of 30 - and it's all connected by sidewalks, which makes a great scooter surface. Alexander's scooter is quickly wearing out. The front wheel isn't even round anymore. Chris went to buy him a new one and instead returned with two new sets of wheels and handles, one for Alexander, and one for Benjamin. 2 hours and one trip to Lowe's later, they have what look like brand-new scooters. I figure this is a good lesson in fixing, not throwing away and buying anew.

The "scooter boys," as we call them, are a little rough looking. For starters, they all have mohawks. That alone, I have to admit, scared me a bit. They ride around without shoes or helmets, and they've forged paths in the woods behind the complex. Last week, while mom was here watching the boys and Chris and I were at school, I returned to the house to discover 6, yes SIX, extra children in our tiny apartment! Four boys and two girls, plus my three made NINE kids in their bedroom. Did I mention the bedrooms are fairly large? To my pleasant surprise, the kids were polite and cleaned up the room when I asked. Guess you can't judge a book by its cover.

So who lives in an upscale apartment complex? That's what I wondered. We wouldn't be able to afford it if we hadn't found a special deal on Craig's list. It turns out most of the residents are college students. We've been watching them come in by the truckloads for the last two weekends. If you have 4 people, $1000 rent doesn't sound like much. Cable is even included. Luckily, we haven't heard much from them, even on the weekends. The rental place is very strict about parties. One group moved in on Friday, had a party on Saturday, and were out by Monday! Imagine calling your parents from college with that news.

Our house is chugging along. On a drive-by tonight, they had put up one interior wall and the front porch roof. The rest of the roof is sitting in our front yard, just waiting to be put up. It makes me want to call in sick tomorrow just to watch. But I won't. Instead, I'll bring the boys by as soon as they get off the bus. Hopefully we can catch them in action.
Posted by Karen and Chris at 8/31/2009 09:54:00 PM No comments:

First day of school for my elementary school boys 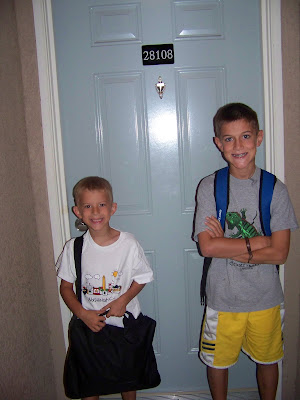 This is the first year ever that Alexander is not crying in our morning picture. 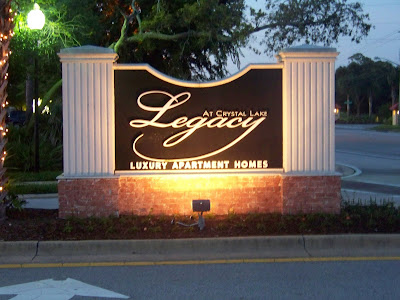 We had to wait at the front of our apartment complex. 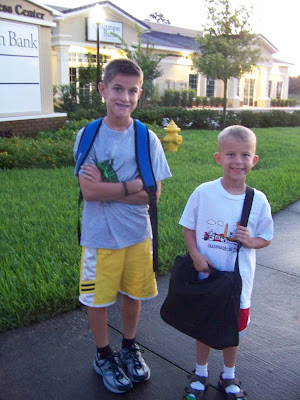 The sun was just coming up...can't wait until daylight savings time - NOT. 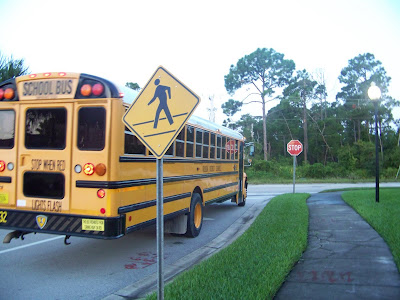 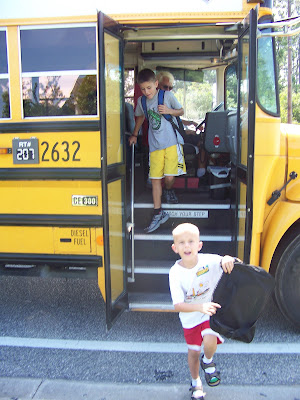 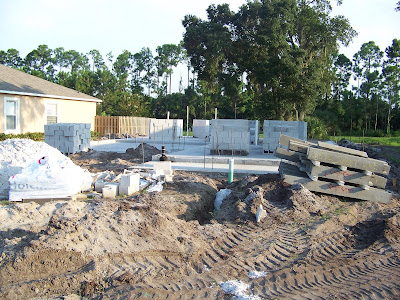 Our slab was poured last week. On Monday, Chris drove by and saw these concrete blocks. We were so excited! 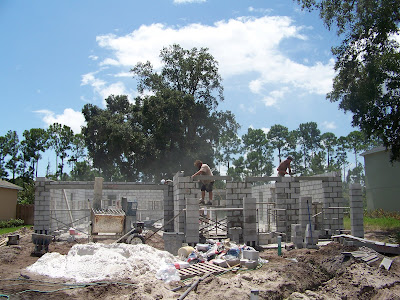 This afternoon, around 1PM, I was driving to Publix and saw the men working. I can't believe how quickly they put up our first floor! 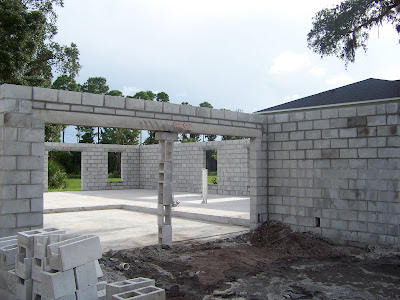 Here's what it looked like after dinner. This is the garage - notice they're holding it up with a contraption of cinderblocks. 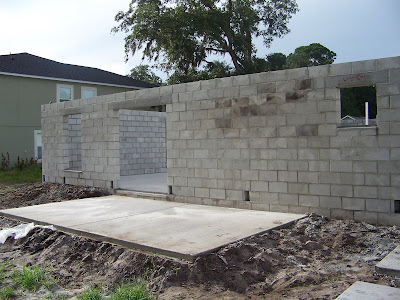 The back - this is the slab for our porch on the lower right you can see the two slabs for the air conditioners. 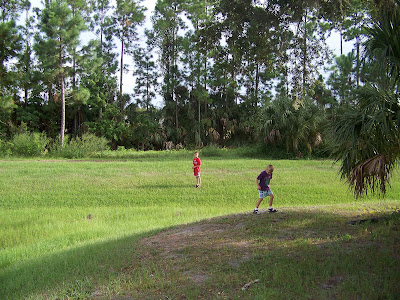 The boys were playing in our backyard. This area isn't officially ours, but it comes right up to our property, giving us a bigger yard with none of the responsibility! 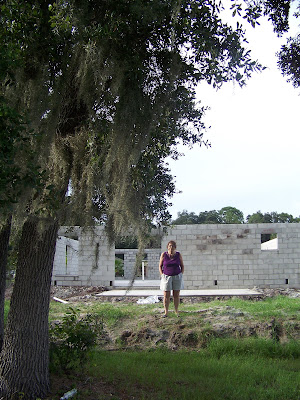 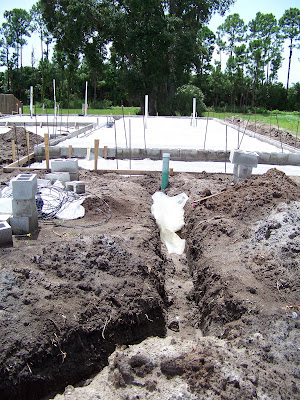 Ever since we returned from the cruise, we've kicked into high gear. First I needed to download all of the pictures and go through them. An enjoyable task, but a task nonetheless. We closed on our house - yea! - and moved into our 1000 sq foot apartment. I set up my classroom, mom came down to help watch the kids during teacher week, and we flew for a very quick trip to PA to see Tom and Eleni get married. Chris' parents flew to Europe, we shopped for school supplies for the kids, got Benjamin's schedule changed, and throughout all of this, watched our house slowly develop.


All of the pipes are in. The dirt has been pushed back on top of them, and the ground has been treated for termites. 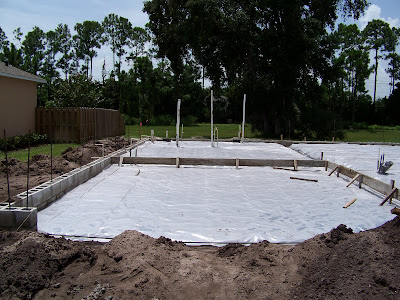 It's just waiting for the slab to be poured. 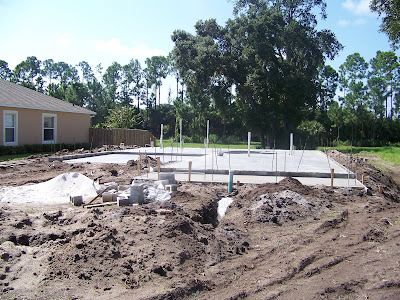 On Thursday, while I was in school, I got a call from mom that the slab had been poured! How exciting!!! I'm not sure how long it has to sit, but soon we'll see walls coming up.

We are all moved in the apartment. Everything is unpacked. The boys are playing on the playground set outside our window, and are making friends. We got our first mail delivery, and it wasn't a bill! We also finally went grocery shopping for the first time in about two weeks. It was a pleasure last night to cook! The boys made dessert this morning.

Mom is here. I asked her to come down to help watch the boys. On Monday teachers start school but the kids don't. She'll watch them all week and over the weekend, when Chris and I fly to PA for Tom's wedding. It will be a quick trip - Friday through Sunday - but we can't wait to see him get married.

The house continues chugging along. Driving by this morning, we saw that it is ready for the foundation to be poured. We've gotten a lot of rain lately, so hopefully they can get this done soon. Once the roof is on, the work takes place primarily inside and is not so dependent upon the weather. We shopped for appliances yesterday. Can't wait to have our state-of-the-art WD, fridge, etc!
Posted by Karen and Chris at 8/15/2009 05:11:00 PM No comments:

Spent 4 hours this morning hauling more "stuff" to the apartment. Almost all of our clothes and kitchen gear is out of the house and in the apartment. Tomorrow morning we're going to take other "stuff" to the storage place we're renting in the complex. We needed a place for our lawn mower, bikes, etc.

As much as I'm not eager to be squished in 1000 sq. feet, I'm ready for this move to be over. Having half of our things at one place and half at another is very inconvenient. We had frozen waffles on paper plates for lunch today, and now I'm packing up the rest of the dishes and utensils.
Posted by Karen and Chris at 8/10/2009 01:41:00 PM No comments:

I'd like to share my Snapfish photos with you. Once you have checked out my photos you can order prints and upload your own photos to share.
Posted by Karen and Chris at 8/04/2009 04:02:00 PM No comments:

I'd like to share my Snapfish photos with you. Once you have checked out my photos you can order prints and upload your own photos to share.
Posted by Karen and Chris at 8/04/2009 01:57:00 PM No comments:

I'd like to share my Snapfish photos with you. Once you have checked out my photos you can order prints and upload your own photos to share.
Posted by Karen and Chris at 8/04/2009 12:03:00 PM No comments: 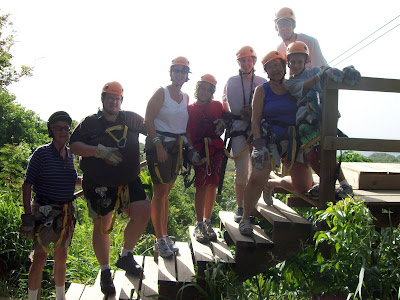 We returned from our cruise yesterday. All but one of us slept on the way back from Tampa, and then the boys were in bed by 9 and slept until 8 this morning. We're exhausted, but we had the time of our lives. I'm just now starting to sort through all of our pictures. It still feels like we're on a ship. Let's just say running was a bit of a challenge last night and this morning. Hopefully it will wear off soon.

I'll be posting some pics by day, but for now, here's a picture of our group ziplining. Even Mom and Dad joined in.