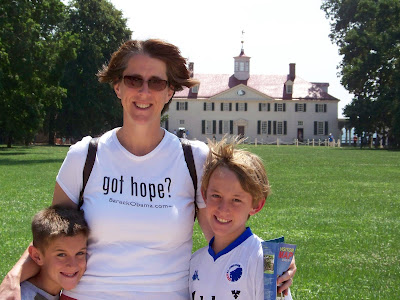 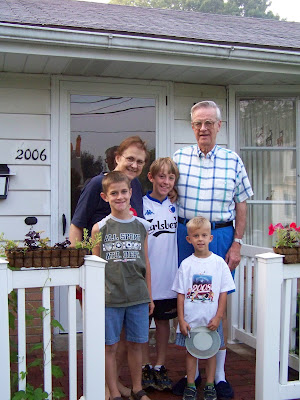 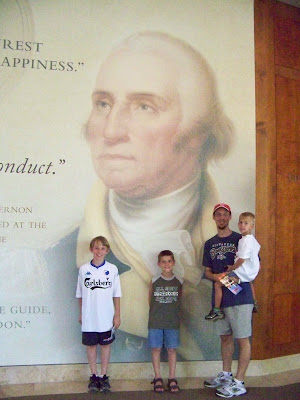 We left Allentown this morning to begin our trip home. Our first stop was Mount Vernon. Surprisingly, we made it in 3 1/2 hours, with no pit stops. Boy, are those DVD players a miracle.

Mount Vernon was hot, but wonderful. Chris and I were last there 3 years ago on a teacher's tour. Since then, a new education building has been completed and all work on Mount Vernon itself has been finished. Benjamin was most impressed when he touched the orginial banister on the way upstairs. The guide rattled off many of the famous people who have touched it, including, of course, the Washingtons, as well as Thomas Jefferson, John Adams, James Madison, Abigail Adams, Patrick Henry, and James Monroe. Pretty impressive.

The education wing had two interesting videos, one that included cannon fire that "shook" your seats and "snow." We didn't spend too much time at the exhibits, because by that time the boys were, of course, starving.

After a picnic meal at one of the many parks in the area, we drove through some very heavy traffic and arrived at our hotel in Richmond, which has free internet. YEA!!! While I was checking in and asking for directions to the ballpark, I met the father of a Richmond Braves' pitcher. We went to the game (AAA farm team of Richmond, playing the Durham Bulls.) It was incredibly hot, and the $9 I spent on slushees was the best money I spent all night. By the 7th inning, the boys were a bit bored, so Benjamin and Alexander asked if they could move to where they thought the foul balls would go. We let them, and lo and behold a few minutes later Alexander was the proud owner of a baseball!!!
On the way out, we bumped into the father again, who had his son sign the ball for us. He pitches tomorrow night, and is going to get us free tickets. During the day, we plan to swim at the hotel and visit the Richmond Science Center, which got rave reviews from others at the game. It's supposed to be hot again, so an air conditioned building sounds good to me, especially if we're going to another ball game.
The boys fell asleep around 11PM, so we are hoping they sleep until at least 7:30 tomorrow morning. Wishful thinking? We'll let you know!
Posted by Karen and Chris at 8/06/2008 11:14:00 PM