A house in chaos 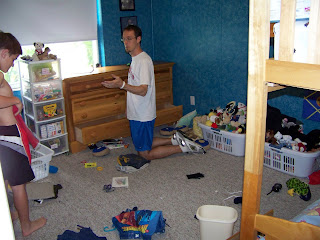 Being spring break, we decided to take advantage of the time and get some housework done. Specifically, we are changing the boys' rooms. We have two bedrooms to work with. Currently, all three boys reside in one, while their toys reside in another. As of tomorrow, Benjamin and Alexander will share one, while Jonathan will have the smaller room to himself. 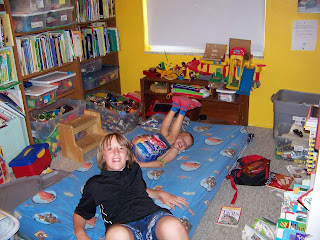 This changing involves quite a lot of chaos. Our first task was to disassemble Jonathan's bunk bed, which is a task in itself. It is now sitting in our garage and listed on Craig's List. Then we began the task of going through all of their clothes. Another gigantic task. Now there are clothes all over the house in different piles, waiting to be put away. 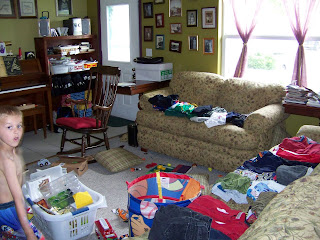 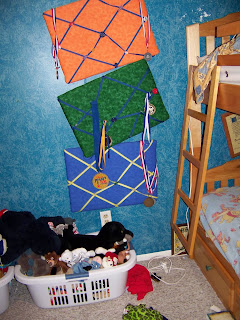 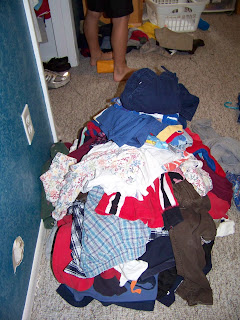 This is the pile of outgrown or unwanted clothes from Benjamin and Alexander. They have an exorbitant amount of clothes. It's almost embarassing. They have gotten many either as gifts or hand-me-downs, but it got to the point where Alexander couldn't fit his pj's into his drawer. He probably had 15 pair - WAY more than he needs, for sure.
Tonight we are going through the stuffed animals. How three boys ended up with four laundry baskets of stuffed animals, I'll never know. But after tonight, I guarantee you there will be many many less!!
Posted by Karen and Chris at 4/05/2009 07:13:00 PM