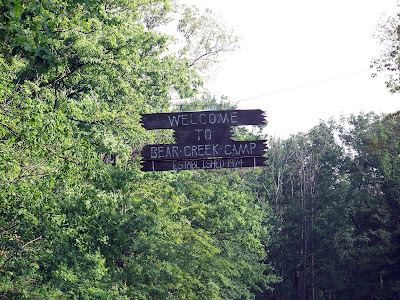 On Saturday, we drove up to Bear Creek to pick up Alexander and Benjamin from camp. We left camp in a rush, with Alexander crying and being held back while we got into the van. We knew from experience to make a quick getaway and not prolong the "goodbye" part. On the way there, at first he refused to put on his seat belt so I couldn't drive (I did anyway.) Then he wouldn't put his shoes on so he wouldn't have to go (we made him go anyway.) 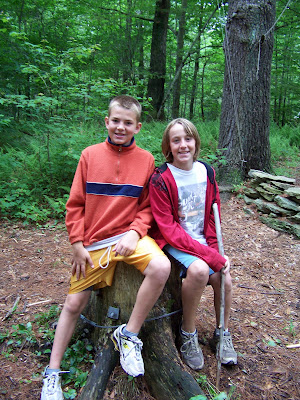 Jack, their cousin, was there, too. Jack and Alexander were in the same cabin, which helps a lot. Benjamin was promoted to the "middlers" unit for 5th and 6th graders. He and Jack had a great time. 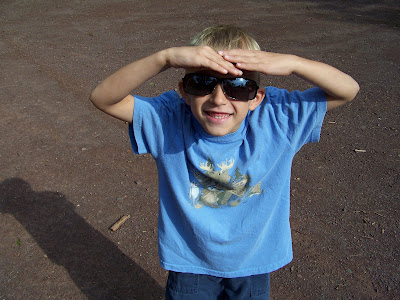 Jonathan can't wait until next year, when he's old enough to go to "try-camp," a 3 day program for first graders. 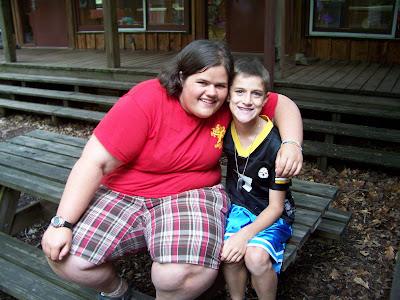 So, how did Alexander do? This is Allison, a floating counselor for the juniors. She was his pal throughout the week, helping him when he got worried. She came in handy the one day that another boy in his cabin threw up - right in front of Alexander!!! He got through that episode, which is pretty amazing, given his anxiety about throwing up. 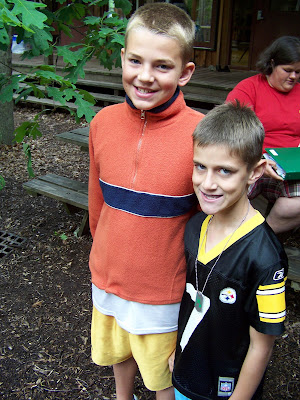 We asked Alexander how camp was, and he didn't rave about it. He didn't hate it, either, which is typical Alexander. He had a good time overall. Our challenge will be to get him to remember the good times, not the bad. As he gets worried about things, he tends to block out the good memories and focus on the bad.
Will he go back next year? We'll see. It's ultimately up to him, and he has until December to decide.
Posted by Karen and Chris at 6/29/2009 01:03:00 PM