On Turning 40 and the Super Bowl 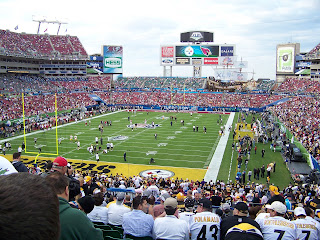 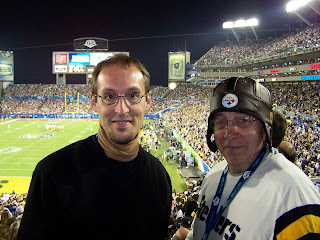 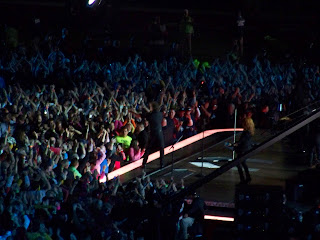 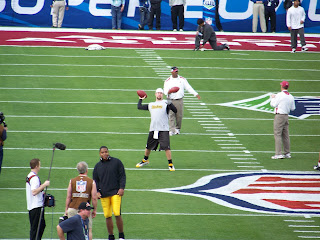 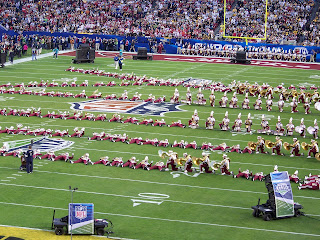 So, let me lead off by saying that if turning 40 means having a weekend like I had last weekend, I hope you turn 40 REALLY soon!

First, Friday afternoon about 1:30 my favorite sister (ok, my only one, but after this weekend she will always be known as my favorite sister) called my cell, which is unusual because I'm teaching at that time. I knew that she was travelling that day from Harrisburg, PA to Tampa since she had tickets for the Super Bowl, so when I saw it was her on the phone, I had visions of planes landing on the Hudson, so I answered it -- after apologizing to my class. Cindi's first question was, "So what are you doing on Sunday?" My answer (which sounded very funny to my class, who was staring at me): "Going to church...." She then asked, "How would you like to go the Super Bowl?" Now, most human beings would start jumping up and down or something, but since I'm in front of my class and a bit on the uptight side (well, ok, very anal retentive -- I'm German, I can't help it!), I think all I meekly said was, "ok." Cindi went on to explain that she thought she was about to win an online e-Bay auction for 2 tickets, and her father-in-law would get one ticket and I could have the other one. Wow. I was almost literally speechless. I had no idea what to say or how to act in front of 24 freshmen in high school seeing their teacher talking on a forbidden cellphone. She later texted me that I got the ticket, under the stipulation that I rooted for the "right team." No problem!

So later on Friday night, with all of the excitement and anticipation of later going to the Super Bowl, Karen and I joined my parents and Brian and Barb Larson for an evening at the theatre. We were able to hire a babysitter (one of my students who already knew the boys from Europe) and go out to dinner beforehand. Although I was a bit dismayed by the lack of a Reuben sandwich (my predictable norm), my disappointment was quickly dissipated when I saw I could get Liver & Onions (with bonus mushrooms included)! Must you be old to get excited about liver?! Well, so be it; it was delicious.

The play we saw was called "Wittenberg," a brilliantly written comedy where Martin Luther and Faust (the guy who sold his soul to the devil for material gain) vie for the soul of Hamlet, who is a student at Witt. This premier performance was incredibly engaging with a dialogue that characterized Lutheran theology precisely while also having Hamlet speak in iambic pentameter. I know it doesn't sound funny, but trust me, we were laughing not only during the play but also most of the hour ride home as we recalled the best lines and scenes. I (really, we) highly recommend seeing it if it should ever play close to where you are.

On Saturday, we had my parents, Gretchen and Jeff Wedge over for a good ol' barbeque of brats, beans, sauerkraut, and potato salad. What better meal to have on your 40th b-day!?! Afterwards, I packed up a duffel to take with me to Tampa and headed out for my 2 1/2 hour drive to Tampa/St. Pete! I met Cindi and her party (11 people, including myself) in the hotel, which was almost completely black and gold for the Steelers. I was able to figure out that the "right team" was the Steelers.

How does one describe a once-in-a-lifetime experience like attending the Super Bowl, especially when it was a complete surpise present for your 40th birthday and the game turns out to be a classic?!? I guess it should start with my sincerest thanks to Cindi and Tom for allowing me to be a part of it all. I'm sure there was at least a little reservation about allowing a life-long Packer-Backer into their midst, but I am proud to say that the Steelers are my favorite AFC team, and I cheered them on as if I had been for 4 decades. Their team, their coach, their organization, their ownership, and their city all share a quality that is rare in sports today. I always enjoy rooting for the teams that exhibit character, dedication to players, a certain humbleness (as much as sports stars can have), and high ethical standards, and the Steelers certainly qualify in this regard. Plus, Karen and I were engaged at the fountain on the point where the three rivers meet, so what's there not to like?!

Some highlights -- watching my nephew amuse himself with his cousin and friend at the tailgating party by spitballing everyone in range, only spending 27 minutes and 17 seconds (yea, I timed it) in the security line, noticing the 8:1 ratio of Steeler to Cardinal fans, running the 40-yard dash against my sister at NFL Experience, getting goosebumps while watching Jerome Bettis, Dan Patrick, and Keith Olberman shoot the breeze between NBC studio takes, learning that Weinrichs can't kick a football off a tee, being 5 yards away from the Lombardi Trophy, seeing Kurt Warner and Hines Ward embrace before the game, getting an awesome picture of Ben Roethlisberger warming up, seeing Bethune-Cookman's pregame show, receiving my mom's very first text message, finally seeing Bruce Springsteen (now I can wholeheartedly claim my NJ roots -- they were questionable before), paying $9 for a slice of pizza, acting as a body guard for Cindi's father-in-law Lou who was getting too many compliments on his throwback leather helmet for his own good, waving my terrible towel every time Pittsburgh's defense was on the field, texting Karen every time there was an official review since they weren't showing replays in the stadium, witnessing 2 of the greatest plays in Super Bowl history (100 yard interception touchdown and The Catch), and getting the greatest hug from my sister at the end of the game.

What more can I say? What a birthday, what a weekend.