Jonathan does it again. 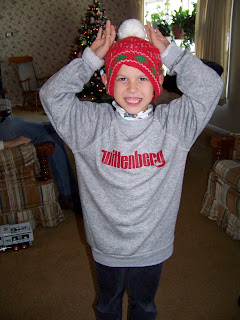 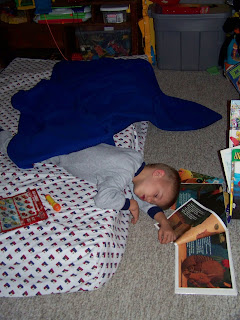 Well, I've got another good story about Jonathan. Let me begin by saying that he likes to sleep. Anytime, anywhere. I was very upset when I learned that his school has cancelled nap time for Kindergarteners. He is so tired at the end of the day that he often falls asleep at the afterschool program or on the way home. If he's ever in the car between the hours of 2-5PM, he'll fall asleep. Sometimes within the first 60 seconds.
So I guess I shouldn't have been surprised yesterday. He had a dentist appointment to fill his two cavities. (How he got them is another story!) We were there at 3:30, waiting patiently and reading a book. I noticed that he was starting to feel a bit "heavy." He was dozing off. I managed to keep him awake for our 30 minute wait.
onathan goes to a prediatric dental practice, and they are wonderful! He picked the movie Cars, which they put in on the ceiling TV. They put the novicaine in, and we waited for it to take effect. The next thing I know, he's sound asleep. In the dentist chair. The hygentist insisted it wasn't the nitrious oxide. I knew she was right - the kid can fall asleep at the drop of the hat.
What to do now? They started working, drilling out the first of his cavities. He stayed asleep for at least the first 5 minutes, finally waking up while they were drilling his molar. He was a trooper, lying there for the two fillings - one a new "silver tooth." Then the dentist said, "It looks like he has another little one on his canine. I'll quickly clean it up and fill it free of charge." And he did. We got 3 for the price of 2, and let me tell you, the price is not cheap.
We now have Jonathan on a special toothpaste AND mouthwash, hoping to avoid further fillings. And we have a great story to tell. The dentist's office will be telling it as well - this was the first time a kid has slept through a filling!
Posted by Karen and Chris at 2/05/2009 09:23:00 PM