Tis the 5K Season! Two weeks ago we ran the first race - hospice of Port Orange. I beat Benjamin by a mere 30 seconds. Alexander ran with his friend Lynnlee, and Jonathan ran the kiddie race. 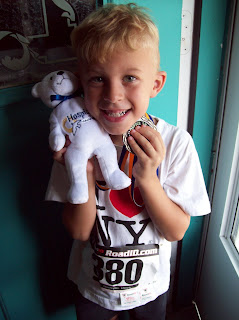 He was very proud of his medal and stuffed animal! 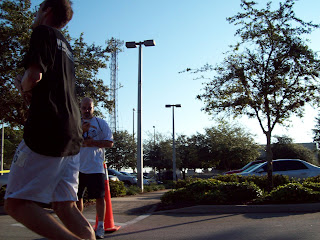 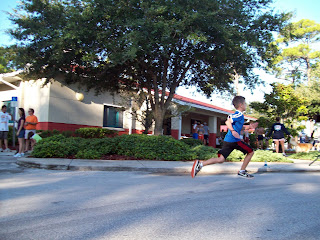 Today was the next race in the series. Lynnlee wasn't there, so I ran with Alexander. Benjamin had elected to sit this one out, so he watched Jonathan during the race and took pictures. Chris was going so fast, he sped by the camera. I paced Alexander to run his personal best - 33:53!

What I love about local races is that you never know who is going to be there. Alexander lucked out and was the only one in his age group!!! So here he is, holding his first place trophy. Pretty cool, huh?? 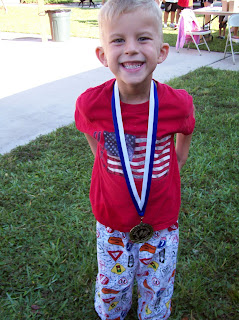 Later, Jonathan and Benjamiun ran the one mile kiddie race. I think Jonathan is still wearing the medal now. All in all, it was a fun morning. Then we got home and had to mow the grass (Chris and Benjamin - see Benjamin's blog for details) and clean the house (the rest of us!) But now we've finished and are relaxing while watching Evan Almighty. All in all, a very productive day.
Posted by Karen and Chris at 9/27/2008 02:09:00 PM